An Overview of Abyss 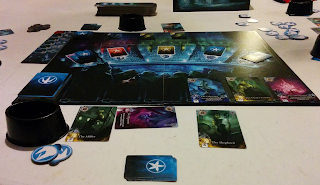 In the murky depths of the undersea realms, the lords vie to become king of the abyss. You are jockeying for position, using your influence to curry favour amongst the other lords, to seek support of allies, and to secure control of various locations. In the end, the player with the greatest amount of political power will be crowned king, and declared the winner.

The game consists of a board, an exploration deck, a lord deck, location tiles, a threat track, monster tokens, key tokens, pearls, and plastic shell-shaped cups to keep your pearls in. The pearls are one of the nicest things about this game; for all practical intents, the pearls serve as currency, and the pearls in this game are represented by actual replica pearls. They are small iridescent white balls that look very much like real pearls. The cups that hold them have rounded bottoms, so it's very easy to get distracted spinning the pearls around in the cups (and, of course, occasionally chasing a pearl across the room as it flies out of the cup when spun too hard, only to roll off the table, across the floor, and under the sofa). Every time I've played Abyss, nobody can resist the charm of the sound of pearls spinning around inside the cups...

Anyway. The artwork on the board represents the assembly of courtiers in the undersea kingdom. In terms of mechanics, there are three sections: the exploration track, the council, and the court. The exploration cards are placed on the leftmost space of the exploration track, the lords cards are placed in the rightmost space of the court, and one lord card is dealt face-up into each remaining space on the court. Each player gets a single pearl to put in their cup. The location tiles and monster tokens are stacked nearby, and the threat track is placed beside the board with the threat token on the top space.

At the start of each player's turn, that player may take an optional action to spend a pearl to draw a new lord card (if there is an empty space available in which to put it). Once that is done (or passed), the player must take one of these three possible actions:

These actions work as follows:

The active player turns over the top exploration card. That card may be an ally, or it may be a monster. If it's an ally, the other players are given an opportunity to purchase it, in clockwise order. So if the player to the left of the active player passes, the next player to the left has a chance to buy that card. If no one purchases it, the active player may elect to take it for free, or to draw a new card. If he draws a new card, the rejected ally is placed in the next empty space on the exploration track.

Once a player has purchased an ally, that player may not purchase any more allies on the current player's turn. If a player passes on purchasing an ally, it does not prevent that player from purchasing a subsequent ally. The first ally purchased on the active player's turn costs one pearl, which is paid to the active player. The second ally purchased costs two pearls, and so on. The active player cannot elect not to take the card that would go in the fifth and final space on the exploration track; however, he is given a pearl from the treasury for taking this card.

Ally cards are useful because they are used to purchase Lords. The allies come in five races: crabs, jellyfish, seahorses, shellfish, and squids, each of which may be of value one through five (the higher the value, the more uncommon it is to find an ally of that value).

If a monster card would be placed in the fifth space of the exploration track, the active player must fight it, but gets a pearl in addition to whatever reward he gets for fighting that monster.

Once this action is complete, any monster cards on the exploration track are discarded and the ally cards are placed into the appropriate space on the council (the middle section of the board).


Request Support From the Council

The council is made up of five spaces on the board. Each space is labelled with one of the races of allies (crabs, shellfish, seahorses, squid, or jellyfish). The ally cards not taken during the Explore action are placed face down in the appropriate place on the council. Thus, after a time, you will have a stack of face-down cards in each space. You don't know the value of the cards, but you are allowed to count how many cards are in each stack.

A player who chooses to take this action takes all of the cards in a single stack and adds them to his hand. This allows you to collect a large total value of ally cards quickly, but you don't always know what the exact total is going to be.

To recruit a lord, simply spend the appropriate value in ally cards from your hand. You are allowed to overspend, but you receive no 'change.' You can use pearls to pay some of the cost of a lord, so long as you have at least one of the required number of ally cards. However, you keep the lowest value ally card from the ones you spent to purchase a lord as an 'affiliated ally,' which is placed in front of you. Affiliated allies cannot be spent, but instead are potentially worth Influence Points at the end of the game.

After recruiting a lord, the remaining cards are moved as far as possible to the right. Empty spaces are not filled with new cards until only two cards remain in the court section of the board. The player who buys the third to last card (thus triggering the drawing of new lords cards) gets two pearls as a bonus.

Once you have taken one of these three actions, if you have three unspent keys either as tokens or on lord cards, you must take one of the location tiles. These tiles are worth Influence Points, based on some combination of other items in your tableau (for example, The Closed Tower is worth 3 Influence Points for each lord card you have with a key icon). However, when you acquire a location tile, you must place it across the lord cards used to acquire that location in such a way as to cover the text on that card. In this way, those lords are prevented from using their powers for the remainder of the game.

Once a player has recruited seven lords, or it is necessary to draw new lords cards but there aren't enough cards remaining to fill all the spaces, the game's end is triggered. After the active player finishes the turn, each other player gets one final turn. Then points are totalled for each player:
The player with the most points is the winner.

Is this a fun game? Yes, absolutely. Does it fulfill the requirements of a good game? Let's see:
Five out of six is definitely not bad. But the thing that really sets this game apart is the artwork. In all the games I've encountered, I think the artwork in this one may be the best. I realise that is a very subjective statement, but the fantastical aquatic creatures are so beautifully and lavishly rendered on the cards and tiles, and even the board itself, I really have to give this game props just for visual appeal. Even if I didn't like the game itself (which I absolutely do), I'd be tempted to buy a copy anyway just for the artwork.

Don't believe me? Look at the photo I posted at the beginning of this article, and then head over to the image gallery at Board Game Geek to see what I mean.

Furthermore, the game tends to result in very close scores. The last game we played, the scores for the four players were 71, 72, 73, and 74. That's pretty sweet! The guy who owned the game told me that he once played a game in which all four players were tied, and the tie-breaker was also a tie, and the second tie-breaker resulted in a win by a single point. So although this game doesn't really allow for upsets, the close scores are very exciting in their own way.

Also, the box is very well designed. As we were putting up the game the last time we played, we found cause to comment on how there was very little wasted space inside the game box, and how well organised it was. Of course, it takes an extreme level of nerd-dom to get as excited as we did by the storage and design of the box itself... but that's the level of nerd that I am.

Anyway. I personally highly recommend this game. But as always, don't take my word for it! Read my description, decide for yourself, and come back next time when it is once more time to