For those of you who follow me on PinkFae gaming, you may have noticed that the site is having issues. The owner appears to be having issues in her personal life. Which is totally understandable; I've been there. But this just happens to come at a time when I am supposed to be writing reviews for a couple of Mage Company's games. I had wanted to wait for the PinkFae site to be up and running again, but it doesn't look like that's going to happen for some time. So as much as I am disappointed to have to do this on the Game Dork blog instead of the PinkFae one, I don't feel I can wait any longer. So today, for my entry on The Game Dork's Gaming Corner, I am going to review the copy of Wrong Chemistry that was very kindly sent to me by Mage Company.

Here is my rating system for those of you that need it:

An Overview of Wrong Chemistry 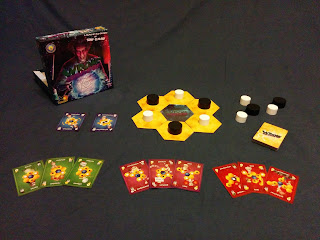 Players have taken on the role of mad scientists, trying to devise various chemical elements in their laboratory. They score points (called 'ideas' in this game) for each element they create. They do this by recreating patterns shown on the cards in their hand. They have four energy points to spend each turn to move the tokens and tiles in their attempt to duplicate the patterns on their cards. The game ends once the deck of cards is exhausted, and whoever has the most 'ideas' is the winner.


A Turn in Wrong Chemistry

Players (two to four) have a hand of four cards. On a player's turn, he has four energy points to spend. An energy point allows a player to:
Once you have duplicated the pattern on one of your cards, you may play that card on the table in front of you. Although the pattern does not have to match the orientation on your card (in other words, you can rotate your card freely to attempt to duplicate the pattern), it must match it in all other respects (empty tiles on your card must be empty on the board as well; the layout of the tiles must be the same, etc). Here is an example of a completed pattern: 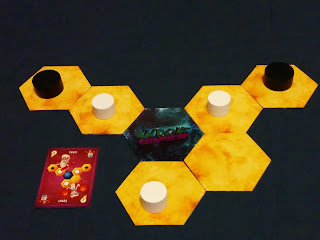 Playing a card in this manner does not end your turn; if you have energy points remaining, you can continue moving tokens and tiles. Thus it it possible to score more than one card in a turn. I've heard of people scoring three cards in a single turn.

In addition to the actions listed above, there are two blue cards on the table which may be used by any player. The first is the 'Restartium' card. This card may be used only once per turn; you should rotate the card 90º to indicate that you have used it this turn, and return it to its original position at the end of your turn so that it is available for the next player. It does still cost an energy point to use this card! However, using this card resets the tiles and tokens to their starting position. Thus, if the tiles and tokens are in a highly scattered state as a result of previous players' actions, such that it would be easier to start over than to try to work towards a pattern in your hand, you can just reset the board and start fresh.

The second blue card is 'Extramovium.' This card can be used multiple times per turn, and does not require an energy point. However, you do have to discard one of the cards that you have already scored to use it. For each card so discarded, you gain three additional energy points on this turn. This card allows you to score the higher-point cards which have more complex patterns requiring more than four energy points to create. In practise, of course, you'll want to score a lot of one-point cards early in the game to serve as fodder for later in the game when you want to get those hard-to-get three point cards.

At the end of your turn, you must draw until you have four cards in your hand again. Reset the 'Restartium' card if you used it this turn. Then inform the next player that it is his turn.

More About the Cards

The deck contains 54 cards, each of which corresponds to one of the 103 elements on the current periodical table. The expansion (Expand your Lab!, which I will review at some point in the future) contains the rest. But for the base game, it uses only 54 of the better known elements. Each card is a pun on the element it represents (such as the element Germanium, represented by the card Germanyum, illustrated with the German flag and other symbols of Germany). However, each card is also denoted with the correct atomic number and elemental symbol for the corresponding element (in the case of Germanyum: 32 and Ge). The rule book even contains an accurate periodic table, which is colour-coded to indicate which elements are represented in the game. In this way, Wrong Chemistry might be used as an educational tool to help students learn the periodic table.

Additionally, there are two mad scientist characters that appear on each card, engaged in some activity in keeping with the pun of the card's name. For example, on the card that corresponds to Uranium (92, U), the title is Urineium, and one of the characters is sitting on the toilet holding a giant cotton swab with a drop of yellow liquid hanging from one end, with the other character holding a roll of toilet paper.

The game does not end when the draw pile is empty, but when a player is required to draw and cannot fully replenish his hand back to four cards. At this time, the game ends immediately. The player with the most 'ideas' (that is, points for scored cards that he has played in front of him) is the winner. If there is a tie, the winner is the one who has the most points in a straight of consecutive atomic numbers. So, for example, if two players are tied with 13 points, and one player has scored Manganiece (Manganese: 25, Mn), Iron (Iron: 26, Fe), and Kobold (Cobalt: 27, Co), he would have a straight of three cards, each worth one point, for a three point streak, whilst the other player had only two cards with consecutive numbers, say, Baron (Boron: 5, B) and Carbone (Carbon: 6, C), each also one point, then the player with the three-card streak would be declared the winner.

This is not a serious game by any means. There's not a whole lot of strategy; it is, after all, difficult to know what the board is going to look like when your turn comes around again. Not knowing what cards your opponents have makes it difficult to intentionally arrange the board to make it harder on the next player. In fact, I have seen it backfire when someone attempts to do so. One player will say, 'I have two energy points left, but I can't score any of the cards in my hand, so I'll move a couple of tokens and/or tiles to make the board harder for the next player to score,' only to have the next player say, 'Thanks! You just made it easier to score this three point card!'

But for a simple, light game (especially one that's suitable for younger players – though certainly not for little kids), or as something for a break between heavier games, Wrong Chemistry certainly delivers. In fact, I'd say the only flaw this game has is that many players take it too seriously. It seems to me that Wrong Chemistry is intended to be a lighthearted romp for a quick laugh. But several of the players with whom I've played have taken it very seriously. They'll sit there on their turn, painstakingly analysing every card in their hand, trying to tease out some strategy for scoring the maximum number of points from one turn. There's certainly a place for that; I don't think you should just randomly move tiles and tokens around hoping to randomly get some points. You do need to consider a planned approach to your actions. But when one player takes ten minutes or more for his turn, much of the enjoyment of the game is lost.

That said, I certainly do not regret owning this game. In fact, a very good friend liked this game so much that he bought a copy for himself after playing his first game with me.

So, I will see you back here next week for another exciting adventure in games! Until then, have fun, and remember to