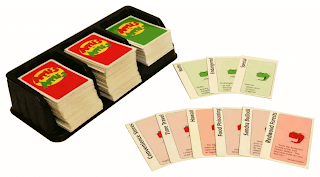 Most everyone knows how this game works. Just in case you don't: the game consists of a number of green cards, which contain adjectives or similar descriptive terms (for example: 'Demanding,' 'Bashful,' or 'Naughty and Nice'), and roughly three times as many red cards, which contain nouns (which can range from simple things like 'Marriage,' 'Claude Monet,' or 'My Boss' to more complex concepts such as 'Berlin - 1945,' 'Hammer & Nails,' and 'A High School Bathroom') or gerund-form verbs (such as 'Skydiving,' 'Ballroom Dancing,' or 'Panning for Gold').

Players have a hand of seven red cards. They take it in turn to be 'The Judge.' The Judge must draw a green card, read it aloud, and place it in the centre of the table. All the other players must then choose a red card from their hand which they feel is described by the green card, and place it face down near the green card. For example, if the green card is 'Devious,' you might choose to play the 'Tony Blair' card.

Once everyone has played (technically, the rules say that the last player to play a card doesn't get to play this round, but in my experience, this results in one or two players being excluded every time, as they aren't as able to think as quickly as the others. Therefore, many groups that I know ignore this rule, and simply say, 'Get your card in quickly so we don't have to wait on you'), the Judge shuffles together all the played red cards and reads them aloud. He then chooses which one is best described by the green card. Perhaps the green card is 'Dangerous,' and the players have submitted 'Feathers,' 'Terrorist Attacks,' 'Worms,' 'Waco, Texas,' 'Steven Spielberg,' and 'NYPD.' Which would you choose as the most dangerous of those options?

The player who played the chosen card gets the green card, which represents one point. The rules specify that the game ends once someone has reached a certain score (the target score depends on the number of players), and the player with the most points wins. However, many people just like to play until they're bored with it and count up the score after that.

I'll be honest: I hate this game. My brain is very literal. When I see a green card that says, 'Cuddly,' I'm going to play a red card that says something like 'Teddy Bear.' So I invariably get a little irritated when the Judge chooses a card like 'Iceberg,' which he then justifies by stating, 'You've never met my ex-girlfriend.' As a result, this game (which seems to me a word game) ends up being more of a social game, where you try to deduce how the Judge will react to the various cards in your hand. Especially given that I am socially incompetent, I am very bad at thinking in those terms. This is also why I hated playing with the listed 'the last player to play a card doesn't get to play' rule; everyone else would easily choose a card from their hand whilst I was still struggling to switch my brain out of literal mode and into social mode. Thus I was almost always the player who never got to play a card.

Another thing that annoys me about this game is the fact that it's dependent on luck more than any other factor. Even for those players who excel at social comprehension, if they don't have any appropriate red cards in their hands, they can't score a point. It goes back to my rant about player agency. I often feel, when playing Apples to Apples, that the randomness which is an inherent part of the game has left me with no viable options for actions to take. That doesn't make for a good game, in my opinion.

Anyway. I know a lot of people like this game. I'm not one of them. I find that the most enjoyable activities for me are those that involve a lot of mental activity. Games that don't involve mental activity, or are of a kind of mental activity that is counter to the way that my particular brain works (such as social interactions of the type required by Apples to Apples), are not enjoyable to me. Which makes game nights with many of the people I hang out with less enjoyable for me than it should be.

Enough wallowing. I have described how I feel about Apples to Apples. Perhaps you disagree, which is fine. People like games for different reasons. I have tried to be as impartial in my description of the mechanics of the game as I can, and in my ratings of the different aspects. With luck, that's enough for you to decide what you think of the game, if you don't already have an opinion.

And with that, I bid you adieu. Join me again for whatever I post next time. Until then,