Even if you only own a handful of games, you may struggle not just with how to store the games themselves, but storage of the game components within those games. This is growing to be a major concern in the gaming industry. We're going to talk about about storage of games and game components.

First, there's the question of how to store the games themselves. This may not be an issue for you, if you don't own many games. Lots of people only own a few; maybe five or ten. Such a small collection can easily be stowed on a single closet shelf. As your collection grows, however, it may become more difficult to find a place to put them. The Dork Spouse and I possess a free-standing cabinet. It's a pretty lovely piece of furniture, with some nice woodwork and metal grating on the door, and three total shelves inside. It has, since we acquired it, become our 'games cabinet.' Apart from a small box of toys, the only thing in it is board/card games, dice, and some binders with our collectible card game collections. And just yesterday, the Dork Spouse said that she was considering making room in one of our closets from some of the contents in the games cabinet, to make room for the obviously impending growth of our games collection. 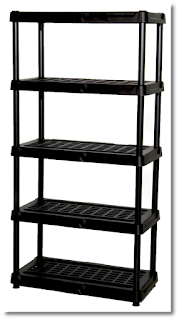 John, on the other hand, has purchased several of those heavy-duty plastic shelves available from home improvement stores to hold all of his board games.

There are, of course, specialised cabinets designed specifically for storing board games. They can be pricey, but for the serious gamer, they may be invaluable. Geek Chic has several gamer's furniture pieces available, which includes some cabinets. Even some of their tables have storage built in (see The Spartan for a high-end example of this).

If you're not as picky, there's a Pinterest board that's chockablock with games storage ideas.

Most people might not see this as a big deal. Just keeping the pieces of your games in the game box is enough of a storage solution for their needs. But some games, especially some of the ones you encounter when you start branching out from mainstream staples like Monopoly and Risk, can be problematic. For example, the game CV, which I reviewed a couple of weeks ago, consists of a couple of decks of cards, some dice and tokens, and a small board. It arrives in a normal-sized square game box, 28 cm to a side and 9 cm tall (11 × 11 × 3½ inches). Yet after opening the box and using the components a few times, the box ends up being mostly wasted space. With the exception of the game board itself, all of the components for both the core game and the expansion fit into the box for the expansion, which is 13 × 13 × 5 cm (5 × 5 × 2 inches).

On the other hand, some games are so densely packed that it's hard to combine expansions. Firefly: the Game, for example, has a plastic organizer in the main game box that keeps everything well organised. However, when I bought the Pirates and Bounty Hunters expansion, there was nowhere to put the new pieces. As a result, even though I don't foresee ever needing to play the base game alone without the expansion (because in my opinion, the expansion adds dynamics that so fill out a lack in the game itself that playing the core game alone is just not worthwhile), I have to keep the items in two separate boxes.

Some companies are beginning to realise this. Slugfest Games is a perfect example; The Red Dragon Inn has five versions of the core set out now, each of which contains four characters. The first four of these are shipped in a 27 × 27 × 5 cm (10.5 × 10.5 × 2 inch) box. This box contains a plastic tray with a compartment for each character, a fifth for the drink deck, and sixth for the other pieces, and a recessed area on the top of the tray to hold the player mats. Although it's possible to combine two of the core games into one box, if you're willing to squeeze everything together very tightly, there's no room for even one more expansion (not even the single-character Allies expansions). However, with volume 5, they've fixed this by shipping the game in a larger box that doesn't have inserts, but instead uses row dividers and separators that lets you keep all your various decks stored together (like many of the current deck builder games out there): 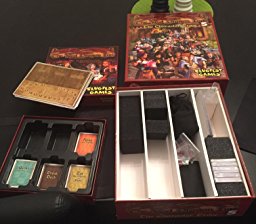 Even discounting the issue of space, some games are poorly organised. Especially games with a lot of components, there may be no easy way to keep the different component types sorted. A perfect example of this is Betrayal at House on the Hill, which has hundreds of tokens for various purposes. Most of them are round, but there are also some square, triangular, and pentangular tokens. The round tokens are colour-coded (for example, the red tokens are people, such as 'cultists' or 'servants,' whilst the olive-coloured tokens are undead creatures like 'zombies' and 'vampires'). The box for first edition had a carboard tray that was divided into six sections, but the pieces of that tray fit together so poorly that tokens would often slide under a divider into another section. Even then, the number of tokens made it difficult to find the ones you needed. The second edition had a plastic tray with specially-shaped compartments, which was an improvement, but it didn't help with finding the right tokens. I solved this problem by purchasing small containers and labelling each with the included contents: 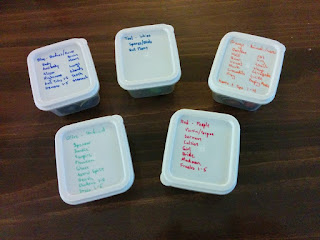 I've seen similar containers used by others, and they're very useful. They can be hard to find, though; I once bought a large supply of bead storage containers from Michael's Craft Store. They were useful because they had attached lids with clips to hold them closed. It seems they don't make those anymore though. If you find anything similar, I recommend stocking up. You never know when you might need some!

There are even some companies out there who now specialise in game organisers. There's a great company out there called The Broken Token. They produce wooden inserts that, when placed in a game box, make it easy to organise the components of that game. They have custom designed inserts for many of the most popular games, including Eclipse, Codenames, and King of Tokyo.

Anyway, I'm sure there's more that can be said, but I think that covers some of the more important topics. I'll see you back here next week. Until then, have fun with your games, however you store them and your components, and remember as always to

Email ThisBlogThis!Share to TwitterShare to FacebookShare to Pinterest
Labels: board game, furniture, storage, The Sultan