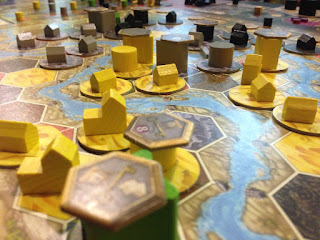 Terra Mystica is a heavy and fairly complex game. Players take on the role of a faction. Many of these factions are a fantasy race, such as elves, dwarves, halflings, or giants. Others are classifications, like chaos magicians, witches, alchemists, or engineers. Still others appear to have been created wholecloth, like the auren or the swarmlings. Regardless of which faction you choose, you take the appropriate player mat, which details all the options, costs, special abilities, etc, for your faction. This mat also provides a place to organise your pieces.

In the centre of the playing area is the game board. This is comprised mostly of hexagonal terrain spaces, including mountains, deserts, wastelands, plains, forests, lakes, and swamps. Rivers separate some of these hexes. Each faction can only settle in one terrain type; for examples, merfolk can only live in the lakes, whilst nomads can only settle the desert, and so on. Players start by placing two dwellings on the board, in any hex they are allowed to settle.

During a player's turn, he may take any one of a list of eight actions detailed on a handy player aid. In some ways, the most important action is to build or upgrade dwellings. This is done by paying the listed cost (usually one gold and one worker cube to build a dwelling; six gold and two worker cubes to upgrade a dwelling to a trading house, etc. Note that trading houses may be upgraded either into a temple — which can be further upgraded into a sanctuary — or into a stronghold). And this is where the unique and interesting mechanic of Terra Mystica comes into play: whenever you build or upgrade a structure, any players who occupy adjacent hexes gain power.

Power is a strange little beast. On your player card are three 'bowl of power.' These are purple ovals on which you place markers representing your mystic power. You start the game with some tokens in bowl 1 and some in bowl 2. These tokens are effectively worthless until they are in bowl 3. They may be spent from bowl 3 by moving them to bowl 1 in order to take a variety of 'power actions,' which are generally detailed either on the game board, your player mat, or one of the various tokens you can receive throughout the game.

When building a new dwelling, you must place it adjacent to one of your existing structures. But, as it is rare to have two of the same terrain type adjacent to one another, this means that you will have to terraform. There is a terrain conversion wheel on your player mat; the further away from your native terrain an existing terrain type is on this wheel, the more difficulty it is to convert. You must use a number of spades (spades are normally obtained by turning in worker cubes, but can be acquired in other ways as well) equal to the number of steps you move along the conversion wheel in order to terraform hexes. Once you have transformed a terrain hex in this way, you place a marker on it to indicate the type of terrain that it has become.

In addition to building and upgrading structures, actions include:


Once everyone has passed, you proceed through the cleanup phase, which involves resetting the once-per-round actions, gaining cult bonuses, and so on. Then the next turn begins with the income phase. The game lasts for a total of 6 rounds. At the end, the player with the most victory points wins. Victory points are rewarded (and can be spent!) in a variety of ways.

This is just the briefest overview (and it's already quite long!) There are a lot of details I've left out (for example, I haven't even mentioned founding cities!). So you can see why I rated the complexity of this game at 5.

The first time I played this game, I lost very badly. I don't normally mind losing, but in this case, I felt like I simply had no real clue what was going on. I had trouble remembering what the iconography on the game pieces meant, I had trouble working out what options were available to me on my turn, and this left me completely unable to devise a strategy. The second time I played, it was better, but I still feel I need to play a few more times to really get a grasp on how this game works.

The other problem I have is that this game has a strong economic aspect. The more structures you build, the more income you receive. But of course, it can be very expensive to build structures. It's the old 'you have to spend money to make money' trope. And for whatever reason, I've never been very good at that. Games with a strong economic component like this are hard for me.

I don't know. I think I'll give it a few more tries before I write it off completely. But I also think it will take me two or three more plays to really get the hang of it. Which is a shame, because several of my friends really like this game. I'd hate to think I'm missing out on something good just because of a bad introduction. So I don't want to just give up on it. But I fear it will take a few tries before I can get it right, assuming I ever do.

Anyway. That's my impression. What are yours? Please let me know what you think in the comments below, and I will see you here again next week. Until then,