A couple weeks ago, I got to play an interesting game called CV. That's short for curriculum vitae, which is Latin for 'the course of life.' Although the term is used in the UK to refer to a usually two-page document similar to what Americans call a 'resume,' this game is based on the idea of telling the story of a person's life.

But we're here to hear the story of a game. So let's start with the statistics:

An overview of CV 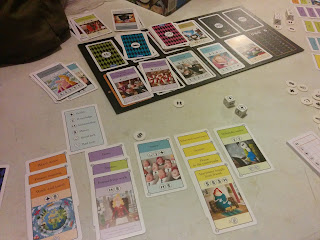 Players will take turns rolling dice and using the results, plus any bonus from cards they already have, to purchase additional cards to add to their tableau. At the end of the game, they score points for cards they have, as well as card combinations available from goal cards. In so doing, you are creating the story of a person's life, as each card represents aspects of a person's life story (health and relationships and jobs and possessions and so forth).

How Does it Work?

The game consists of a board that helps organise the cards, seven special dice, and the cards themselves. The cards come in several decks: childhood, early adulthood, middle age, and old age, as well as the goal cards. With the exception of the childhood deck and the goal cards, these are shuffled and placed in the appropriate place on the game board. Each player receives a goal card. A number of additional goal cards are placed on the board equal to one less than the number of players. The childhood cards are distributed, three to each player, who chooses one and passes the remaining two. Choose another from the two new ones you've received, and pass the remaining card to the next player, who keeps it. In this way, you start off with three cards to help you in the game. Deal the first five Early Adulthood cards onto the available spaces on the board. Now you're ready to play!

The point of the game is to build your tableau by buying from the available cards. The resources you use to buy cards come mainly from the dice. You get four dice (plus any from cards you possess, up to a maximum of seven). These dice are rolled Yahtzee style, keeping the ones you like and rerolling the rest, up to three times. The dice have the following symbols:
These icons are used to purchase the available cards. The cost is listed on the card beneath the title and above the illustration. For example, in the photo above, the 'Manager' card (the third one on the board) costs two health icons, a relationship icon, and a knowledge icon.

Take any cards you've purchased and add them to your CV (that is, place them in your tableau). You must keep them in stacks according to their type. Most cards belong to the same type as the first four dice faces listed above (health, knowledge, relationships, or money). In addition, there are CV cards, which represent jobs you have (or had). The card that is currently on top of a stack grants you certain bonuses, represented by tokens, which are the same as the die faces. These bonuses are listed at the bottom of the card, below the artwork. For example, in the picture above, the 'Intern' card seen in the CV pile grants you one money icon and one relationship icon each turn. These are used to purchase cards, in addition to whatever you roll on the dice.

One other card type exists: events. These are not placed in your tableau as the other cards, but are held in your hand. They can be played for a one-time-only benefit of tokens. The icons work the same: the ones on top are the cost to purchase, and the ones on bottom are the benefit granted when that card is played. In the photo above, you can see an event card in the discard pile to the left of the board: 'Lottery Jackpot.' That card costs two smiley faces to purchase, but when played, acts as five money icons.

You may purchase as many cards as you can afford. Once you are done, move all remaining cards as far as you can to the left and draw new cards to fill the empty spaces. Turn then passes to the left. Once each player has had a turn, discard the leftmost card on the board before drawing new ones.

There is a chart on the board that shows how many points you get for health, relationship, and knowledge cards. The points progress exponentially, so that a second card is worth more than a first, and a third is worth more than a second, and so on. Also, each possession (the yellow Money icon cards) grant victory points as printed on the cards themselves. In addition, players reveal their private goal cards and score them. These are scored by sets. For example, the currently displayed goal card in the photo above ('Activist') grants players two victory points for each full set of one Health card and one Relationship card. Thus, the current tableau is worth 6 points from this card, as there are three sets of one Health and Relationship card each.

I wasn't super-impressed with this game. It was fun, and I wouldn't be opposed to playing it again. But it's certainly not in my list of favourites. The artwork was humorous (like the 'Lottery Jackpot' card, which shows a woman praying as money falls from the sky). It's an interesting concept. And although there is a little bit of thinky-thinky going on in this game, it's not enough to overcome the lack of storytelling for my tastes. I don't know, it just wasn't super appealing to me. There wasn't really anything I didn't like, but there wasn't a whole lot that I did like, either.

But of course, that's just my impression. Don't be put off by what I didn't like. Give it a try for yourself! I'd love to hear what other people think of this game. So go try it out, play more games, and as always,