Leo Colovini is the creator of one of my very favourite games: Clans. Hot Tin Roof has a very different feel. Instead of neolithic settlers coming together to form the first villages, players of Hot Tin Roof are moving cats around the neighbourhood, over buildings, across clothes lines and telephone wires, and through patios to collect the most fish.

I first played this game as a 'Mammoth' version at Gen Con. I thought it was cute, so I bought it as a gift for the Dork Spouse. Of course, it's a bit different when you're moving wooden cat meeples around a board, instead of adorable fluffy plush kittens on a carpet with the game board printed on it.

Still, it was a fun game, so I shall review it now. Starting, of course, with the numbers. 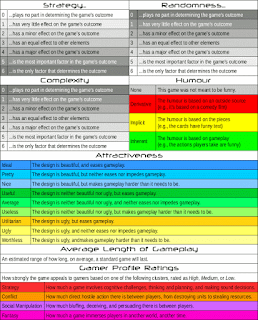 In Hot Tin Roof, players have two pairs of cats. Both pairs are in the players' colours, but one pair is sitting and one is standing: 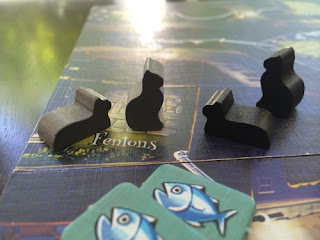 Each player starts with ten sardine can tokens. The board represents a neighbourhood, with houses and attached patios for each family in the area. These houses are partially connected by rain gutters, clothes lines, TV antennae, corrugated metal roof coverings, and the like. These serve as the pathways along which the cats may travel. However, none of them cross the streets between the buildings. Players have six 'catwalks' (which resemble clotheslines, ironing boards, ladders, and wooden boards). These can be used to bridge a street and connect two adjacent rooftop pathways. They also have three shelters (which represent rubbish bins — trash cans — that have been knocked over. These may be placed in a patio to allow you to collect sardine cans from other players when they pass through that patio.

Along one side of the board are five dumpsters. One is labelled 'Shelter,' another is labelled 'Catwalk,' and the remaining three are not labelled. However, next to each unlabelled dumpster is a tile with two families' names on it. And off to one side is the Fish Market, which is a stack of twelve to fourteen salmon tokens (depending on how many players there are).

This photo gives you an idea of what this setup will look like. However, this photo is of the Mammoth game that I played at Gen Con, so the pieces in the game will look somewhat different. Click for a larger view! 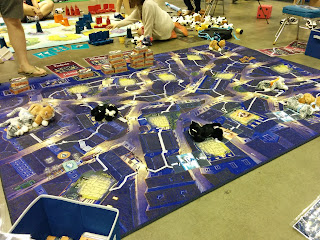 Here's what happens. On your turn, you ante five of your sardine cans. These are distributed one to each dumpster. If you cannot ante, you take two sardine cans from the general supply and miss your turn. Once you've anted, choose one of the dumpsters and take all of the sardine cans from that dumpster, adding them to your own supply.

If, at the end of your movement phase, a matched pair of your cats (both sitting cats, for example) are in the same patio, then both those cats are removed from the board back to your supply, and you take one salmon from the Fish Market.

Salmon, by the way, count as ten sardine cans, and you may exchange with the general supply at any time.

Once the Fish Market is empty, the player with the most fish (each sardine can counting as one and each salmon counting as ten) is declared the winner. However, if you have any cats still on the board, you must pay 15 sardine cans for each pair. The exception to this is if you are able to bring your cats together in a single move, paying the normal cost for entering other players' shelters and using other players' catwalks. You don't get the usual reward for doing this, but if it's possible to get your cats off the board in this way, it saves you the 15 can penalty.

Obviously, this game is not a serious game in any way. It's meant to appeal to cat lovers (so it's a wonder it's not the Official Game of the Internet®. 😉 )

But if you're looking for a simple, cute, easy, quick, and fun game, Hot Tin Roof definitely delivers. The only complaint I have is that the artwork on the game board, though beautiful, can make it sort of hard to see where the cats can go. It can sometimes be difficult to tell which is a pathway and which is just part of the background. This problem is aggravated by the fact that the catwalk tokens can be hard to tell apart (the orange and the brown are a little too similar, and the blue and the violet have a similar issue), and the shelters are even more so (whereas all the blue catwalks are clotheslines and all the violet ones are ironing boards, the shelter tokens are all decorated with similar-looking rubbish bins).

Still, that's a minor concern for most people. As long as you're not colour-blind or otherwise have visual difficulties, it will not likely cause you trouble.

Anyway. That's it for this time. Join me again here next week. Until then,