Board Game Review: Firefly: The Game

As promised, this week is another board game review. Since I haven't yet (for some reason), I'm going to cover the great board game based on a great series: Firefly: The Game. We start, as always, with the ratings:

Browncoats rejoice! Firefly: The Game lets you cruise around the 'verse getting into all sorts of trouble and adventures in familiar locations, like Persephone, Osiris, and the Space Bazaar. You might meet familiar characters, like Yolanda (or was that Saffron? Or maybe it was Bridget?) or Badger.

Here's the premise of the game: the board represents the 'verse. Players choose a ship (the base game comes with four firefly class ships, one of which is Serenity; expansions can add additional ships of other classes), and choose a character to serve as captain of the ship. They then fly around the 'verse, negotiating with contacts (such as Badger, Niska, or Patience) to contract for jobs. Then they continue flying around the 'verse attempting to complete these jobs. Once a job is completed, the player gets paid (shelling out some of that payment to any crew he may have hired onto his ship). As this continues, players work towards achieving the goals described on the story card (there are several story cards in the base set, and expansions add more. Story cards describe the winning conditions; players choose which story card they're going to use before the game begins). The first player to complete all of the listed goals on the story card is declared the winner. 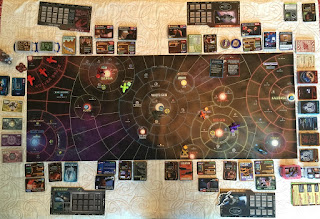 Note that in this photo, all the expansions are included. The base set only contains the middle part of the board; about a quarter of the board on each end come from two expansions.

Really, that's (in general) about all there is to the game. On your turn, you can take any two of the four available actions, as long as it's not the same action twice on one turn: you can fly, deal, buy, or work. Thus, on one turn, you could fly once and deal once, or you could buy once and work once. But you can't fly twice, deal twice, work twice, or buy twice.

Of course, there are a lot of potential permutations involved with any of these actions. The simplest of them is the Fly action; you have two options: Mosey or Full Burn. Mosey means you move one space. Full Burn allows you to move up to the full movement rate of your ship, but you must expend a unit of fuel to do it, and you must draw a card from the Nav Deck for each space you traverse. Most of the cards are 'Smooth Sailing' cards; nothing happens. A few mean that you've encountered wreckage, or a stranded colony ship, or a trade convoy; you can either stop to pick up bonus cargo, fuel, parts, or passengers, or you can just keep going past. However, there are a few cards in the Nav Deck (there's actually multiple Nav Decks depending on which sector you're in) that mean you've run into an enemy ship (Alliance cruisers in Alliance space and Reavers in border space), and that can often have disastrous effects.

The other actions are more complicated. Deal actions can be taken on the appropriate planet (Persephone to deal with Badger, for example) to contract for Jobs (represented by cards). These cards describe where you must go and what you must do in order to get paid. Some of them require you to Misbehave (there are 'Aim to Misbehave' cards that describe some thrilling heroics that you must accomplish in order to continue attempting that job).

Buy actions may be attempted at certain supply planets (Osiris being an example) to look at some of the cards from that planet and decide if you want to buy (or, in the case of crew members, hire) them. These cards can be crew members, who bring extra abilities and increased dice pools to your missions. They can also be gear, which you can assign to crew members. They can even be ship upgrades, which improve your ship in some way. The range of possible effects, abilities, and modifiers is quite staggering, and this is most of what makes the game so complicated: keeping track of all the possible benefits from these cards.

Finally, the Work actions are what you do to attempt to complete the actions described on your job cards. For example, after arriving at the Pick-up location described on your card, you must use a Work Action to pick up (for example) three items of cargo. Then you travel to the Destination location listed on the job card, and take another Work Action to drop off that cargo.

This game is ruled by randomness. The cards available to you, the results of die rolls, and the cards you draw from the Nav Deck are pretty much the determining factor in whether you will be successful. You can attempt to build a crew that will allow you higher chances of success in a greater range of situations, but you have to establish yourself as able to afford to pay each crew member before that can become a viable option.

Normally, I don't care too much for most games that involve a high degree of luck. Being, as I am, a fan of player agency, I prefer games in which my winning or losing is the result of actions I take and decisions I make, rather than on which cards I drew or the results of dice I threw. However, Firefly: The Game does such an amazing job of capturing the feel of the series. I'd argue that it does the best job of any game based on an existing franchise. Moving my little Firefly class ship around the 'verse, seeing Jayne and Kaylee getting into interesting scrapes, the fun of recognising which episode my current card is based on... that makes all the difference. I personally really enjoy this game specifically because of that aspect.

My one complaint, aside from the complexity of all the different little permutations involved in the different actions (ok, two complaints), is that the sheer number of components means that this game takes up a lot of space. Especially if you have either the Blue Sun or Kalidasa expansions. This is not a game that can be played on a folding card table. You need a large gaming table to bring this game out.

Anyway, I think that's enough for this review. Join me again next week when I talk about something completely different. Until then,