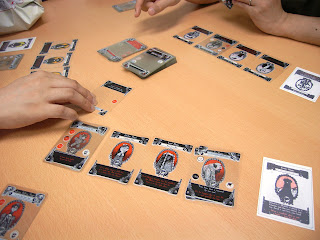 First things first: Gloom is appropriately named. It is meant to be played by people who can enjoy black comedy. If morbid humour isn't your thing, you will want to steer clear of this game. It is, after all, a game in which players make people sad and then kill them. This is definitely not light entertainment.

If this sounds like your cup of tea, however, then read on.

In Gloom, players are given a family. There is usually (though not always) a patriarch, a matriarch, two children or other 'underlings,' and a bizarre character. Each member is represented by a card, which is placed in front of the player on the table, face up. The players are then dealt a hand of cards, the majority of which are 'modifier' cards. These include things like 'Was pursued by poodles' or 'grew old without grace.' Players want to play these cards on their family members to lower their self esteem. The cards are printed on transparent plastic, so the self-esteem modifiers of a card can be seen through any cards placed on top of them. This allows you to play multiple cards on the same character; there are three places on each card (along the left side of that card) that a modifier can appear, so some cards will cover up the modifier on a card underneath it if a modifier is printed in the same spot as on the other card. If you look at the Grogar character card, the one that looks like a teddy bear, in the photo at the top of this post (click on it for a larger version if you need to), you can see that there are three red dots that say '-10' on the left side. However, only the bottommost of those spots is on the card on top (the 'Was Burdened by Boils' card); the two other -10 spots are on cards underneath that one.

Some of these cards have positive modifiers (like the 'Was Wondrously Well Wed' card, which has a '0' spot and a '+20' spot); these are to be played on your opponents' characters to increase their self esteem, thus thwarting that player's plans.

You have two actions on a turn, however, on your second action, you are not allowed to play an Untimely Death card. These cards are how you kill your characters. Such cards include things like 'Was Baked Into a Pie.' You cannot play an Untimely Death card on a character unless that character has a negative self esteem total; this makes it harder to kill off your characters, as other players will always have a chance to play positive modifier cards on you before you get to play that Untimely Death. Once a character dies, however, no further cards can be played on him or her (unless you have a special Event card that allows such an action, or brings the character back to life).

This sounds like a very simple game, and really, it is. Until you take into consideration the actual point of the game; this is one of those games that is not meant to be played by competitive players who only care about trying to win. It's about telling stories.

See, you don't want to just play a card on your turn. You have to weave a narrative about how that card comes to pass. For example, you shouldn't simply play the 'Was Disgraced at a Dance' card on your character Lord Wellington-Smythe. You should make a story out of it. Maybe you could say: The Lord Wellington-Smythe, having been cast out of the halls of the social elite [referencing the 'Was Shunned By Society' card played on the character two rounds ago] as a result of his affair with a former prostitute [referring to the 'Found Love on the Lake' card played by another player three rounds prior] went to drown his sorrows and found himself feeling much better [alluding to the 'Was Diverted by Drink' card played last turn]. However, he had to drink so many shots of absinthe to achieve that improved self-image, that he lost all sense of decorum and moderation. He found himself wandering the streets of London, until he passed a building from which he heard the most merry sounds. He stumbled through the doorway to find himself in a large and magnificent ballroom, where a throng was enjoying a rousing waltz. Filled with the joy of seeing people so gloriously enjoying themselves, and his head still hazy from an absinthe-induced fog, he took it upon himself to join in the festivities. He cut in unceremoniously on the nearest couple, pawed clumsily at his unwilling dance partner, crashed about the room in a most ungainly manner, overturned several tables, ruining countless priceless outfits with spilt food and drink, and injuring several people (himself included) in the process. After he was summarily ejected into the dirty streets, he fell unconscious in an alleyway. Upon waking the next morning, he managed to fight off the hangover enough to trudge home, where he was horrified to see his likeness in the newspaper with an article describing his drunken antics at the royal waltz society. So it was that the Lord Wellington-Smythe was disgraced at a dance.' It is at this point, at the very climax of the story, that the card is actually placed on the character.

This is the appeal of Gloom for me, and for many who enjoy the game. It doesn't matter who wins; what matters is that the players tell epic stories of woe and weal in the process of playing.

Of course, not everyone enjoys storytelling games of this nature. If you are such a player, then Gloom is not for you. If you do like telling stories, though, then you really must give Gloom a try.

And with that, I will bid you adieu. Don't forget to watch for my articles over at pinkfae.com, and until next week,