A few months ago, a friend introduced me to a very fun board game called Scoville. The point of the game is to grow, crossbreed, and harvest peppers, which are then combined in recipes. I really enjoyed it, so let's take a look at it now, shall we?

We start, as always, with the numbers:

The game board in Scoville represents a plot of farming land. There are a few other spaces around the board that are important for turn order, special victory point prizes for being the first to plant certain peppers, and other things, but the farming plot is the most important. It's made up of several squares, each of which has a pepper-shaped cut-out in it. The game starts with a couple of the least spicy peppers in the two central squares, and each player has a few of these peppers in his inventory. 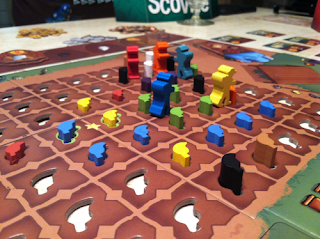 The planting phase involves players placing peppers from their personal pile in the empty squares on the farm plot. The harvesting phase involves moving your farmer meeple along the spaces between the peppers in the farm. Movement is limited; you can't turn around and you can't move through a space occupied by another player. But when you walk between two peppers, you pick up a new pepper. The colour of the pepper you pick up is determined by the colour of the peppers between which you walk. Normally, walking between two peppers of the same colour gives you another pepper of that colour. Walking between two different primary colours gives you a secondary colour (for example, walking between a blue pepper and a yellow pepper gives you a green pepper). Mixing secondary colours starts getting you more advanced peppers, like the brown, black, or white peppers. And if you can mix black and white peppers, you can get the hottest pepper of them all: the clear colourless pepper.

Once you start accruing peppers, you can use them to make recipes. Sitting alongside the board are several recipe cards. They range from simple, not-at-all-spicy recipes like 'Born to Be Mild,' which requires a yellow pepper and a purple pepper, to melt-your-face-off recipes like 'Phant-om-nom-nom,' which uses three colourless peppers and two brown peppers. The spicier the recipe, the more victory points you get for it.

There are a few other steps, like buying crates that give you bonus peppers, but the only other really important aspect of this game (at least in terms of reviewing the game) is the fact that each player has a small screen behind which he keeps all his peppers, scored recipes, awards, and other items. Thus, you never know how many points the other players have. In fact, these screens caused me to be very surprised when I won the game I played; although I had managed to score some high-point value recipes at the end of the game, I was worried that they wouldn't be enough to exceed the point values scored by the many lower-point recipes that the other players had been accumulating throughout the entire game. But because I couldn't see what recipes they had, I simply didn't know how far ahead of them I really was.

I really enjoyed this game. I may have to pick up a copy for myself some day. But I will leave you with that for now. Until next week,