Hello and welcome to another week of the Game Dork's rantings! It's time for another board game review, and this time around, we're going to do a card game called Sushi Go, by Gamewright Games. It's a fun little card game with an interesting mechanic! The object is to score the most points by picking the tastiest (and therefore most valuable) items from the conveyer belt at a sushi restaurant.

Players start off with a hand of cards depicting various kinds of sushi, or other items associated with sushi (such as chopsticks or wasabi). The hand size depends on the number of players. Each player chooses a single card to play, and they all play that card simultaneously, so you don't know what anyone else is going to play until you've already played your own. Then (here comes my favourite part), each player passes his entire hand to the next player. This means that you won't know what cards you'll have available to play until the next round. This is important, because most of the cards rely on multiple-card combinations!

Let me show you what I mean: 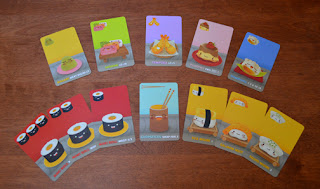 Nigiri is the most straightforward of the cards. Each nigiri card is worth 1 to 3 points (egg nigiri is 1, salmon nigiri is 2, and squid nigiri is 3). However, if you play a wasabi card, it's not worth any points on its own, but it does triple the point value of the next nigiri card you play! So it can be worth a lot of points, but playing it can be risky, because not only do you not have any way to be sure that there will be any nigiri cards in the next hand that is passed to you (or any subsequent hands; the nigiri doesn't have to be played immediately after the wasabi, it merely applies to the next nigiri card you play), but now that you have a wasabi card showing on the table in front of you, the other players will know that they don't want to pass you a hand containing a nigiri card (especially if that card is a squid nigiri!).

Dumpling is the only other card that is worth points by itself. However, the more dumpling cards you have, the more they're worth! A lone dumpling card is worth 1 point. Two dumpling cards together are worth 3 points. Three of them give you 6 points, whilst four and five are worth 10 and 15 points respectively. So they can be worth a lot if you have enough of them, but it can sometimes be hard to get a lot of them, especially if the other players notice what you're doing and start playing the dumpling cards before they get to you so that you can't have any!

Sashimi and tempura are worth points if you have combinations of them. Every two tempura cards you have are worth 5 points together, whilst you get 10 points for every three sashimi cards you have.

Chopsticks cards aren't worth any points by themselves, but if you have a chopsticks card on the table, you can swap it out for another card in your hand at any time. It's a placeholder that essentially allows you to play two cards at once on a later turn. This can be very useful if you've got a wasabi card and a squid nigiri card in the same hand and you want to play both of them!

This game is super fun, quick and easy. I always enjoy it when we play. It's fun to weigh your options; do I play the wasabi and hope that I get a good nigiri card later on? Or do I play it safe and stick with a dumpling that will guarantee me at least one point? On the other hand, the player next to me already has two sashimi cards; do I want to pass him this hand with the sashimi card still in it and give him ten points? Or do I play it to prevent him from getting those points even though it means I won't get any points either?

Anyway, that's it for now. Tune in next time, when I talk about something completely different! Until then,