I learned how to play another great game at the game club I attend. It's called Panic on Wall Street. It takes all the chaos of being a Wall Street stock broker and makes it an exciting game. Let's take a look, shall we? The ratings:

In Panic on Wall Street, players are split into two groups: managers and investors. There will be two winners at the end of the game: a winning manager and a winning investor. In both cases, the winner is the person with the most money.

Play starts out with each investor in possession of a quantity of money and several purchasing tokens. The managers get a little bit of money as well, but they also have three small dry-erase boards that represent a single share of stock in a company. The companies represented are silly industries, like the sausage-in-a-tube or the hamster-powered radio. Game play consists of managers trying to convince the investors to invest in their stocks, and investors deciding which stocks to invest in, all with an eye towards turning a profit.

Here's how this works: each stock is colour-coded: blue, green, yellow, and red. Blue stocks are the safest, with essentially no possibility of losing money, but a very modest return on investment as well. Green stocks have a small chance of losing money, but a higher possible income. Yellow stocks run a decent chance of losing some money, but if they earn money, they earn a fairly sizeable quantity. The red stocks are the biggest gamble; they can end up losing the investors a lot of money, but they can also earn a lot of money! This works through the clever main board, which looks like this: 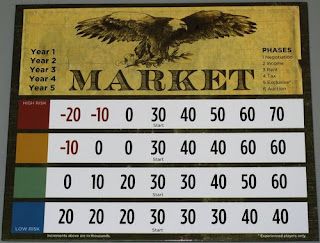 There's a marker on each band which denotes how much stocks of those colours pay out. It starts on the 30, in the centre, and after the negotiation phase, you roll dice to determine how far the markers move before paying out. There's one die for each colour; the blue die has two 0s, two +1s, and  two -1s. Thus, it has equal chance of going up, going down, or staying where it is, and even if it does change, it won't change by much. The green die goes from +2 to -2, so it can move a little faster. The yellow die goes from +3 to -3, but it has no 0. This means it's guaranteed to move, but it won't go any farther than halfway up or down the track. The red die is the most chaotic; it has +3, +4, +7, -3, -5, and -7. So it's guaranteed to move a fair amount, and has the possibility of going from one end of the track all the way to the other in a single turn!

So here's how it works. In the first round, each manager has three stock boards. You turn over the minute timer, and for that minute, there is utter chaos as managers try to get investors to invest in their stocks, and investors compete with one another to get the stocks at the best price. There are essentially no rules on this; whatever deal a manager and an investor agree on is valid. When a deal is struck, the manager writes down the agreed-upon price on that stock, and the investor places one of his tokens on the stock to indicate that he's investing that amount in it. However, if another investor is willing to invest a higher amount in that same stock, the manager is free to return the first investor's token to him and write in a higher price for the second investor to place his token on the newly-vacated stock.

It is in the best interest of the managers to talk the investors into agreeing to a higher price on each stock; this is how they make their money. However, the investors want to pay as low a price on each stock as they can, as the more money they invest in a stock, the lower the profit on that stock. There is a way to 'lock in' your bid, however; if you can convince a manager to accept your bid as a closing bid, then when you place your token on that stock, you flip it over to the 'closed' side, meaning that no further offers may be made on that stock. This is beneficial for the investors, as they now know that they can't be outbid on that stock. The managers want to avoid this for as long as possible, as it prevents other players from offering more money. But if they're reasonably certain that they won't get a better offer, or the timer's about to expire, it's usually worth it to squeeze a little extra money out of the investors.

At this time, you roll the dice to see how the value of the stocks changes. Then the investors receive the value of all stocks in which they've invested according to the main board. Sometimes this means they have to pay out! However they did in this phase, they then must pay the managers their agreed price for all stocks. Once the managers have received their income, they must pay rent on all stocks they own (a flat fee, so the value of a stock has no effect on how much the managers pay). Then five new stocks are put up for auction, and the managers bid on them to add to the range of stocks that they may offer the investors.

This continues for five rounds, at the end of which, the manager and the investor with the most money are declared the two winners.

There is some strategy involved; looking at the numbers on the main board and calculating the probability of how your investments will pay out; hedging your bets against the other investors, deciding to play it safe on the low-risk stocks or gamble on the high-risk stocks. Very often, the game is won or lost on the fortunes of the red stocks; if the dice are on your side, they pay off handsomely. If not, they will quickly drive a player to bankruptcy.

I thought this game was a lot of fun. It's not one I can play often, and it has to be with the right group of people. But for an occasional session of utter chaos and shouting, it can be quite enjoyable. But as always, that's just my opinion! Give it a try and see for yourself if it's something you like!

I hope you enjoyed this review! I look forward to seeing you again here for another entry. Until then,