It's time once again for another board game review. This time, I'm going to talk about a game I played with the local gaming club: Elysium. You know how this starts:

In Elysium, you are trying to create legends. You do this by drafting cards. The cards belong to one of the Greek gods (Zeus,Hera, Athena, Aphrodite, Hephaestus, etc). Each card is rated from one to three depending on power. You can form two types of legends: family legends (from the same family -- that is, the cards all belong to the same god; a family legend contains three cards from the same god, one of each power level) and level legends (a set of five cards of the same rank, one from each of the five different gods in the current game). Collecting legends gains you victory points, as do other in-game effects. 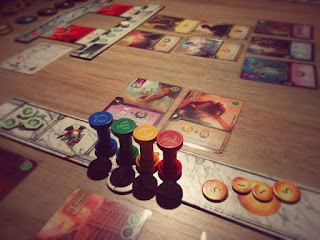 Each player has one of the strips in the foreground, the one that has four multi-coloured pillars in the centre. This is basically an organising tool. You keep your pillars, your coins, and your victory point tokens on it. Also, the cards you have purchased are arranged around it: those above it are in your Domain; they don't count towards your legends, but they grant you special abilities. Those below it are in your Elysium, where they count as part of legends, for victory points, but no longer grant you their abilities.

In the centre of the playing area is the Agora, where the available cards are laid out, and the quest cards. These can be seen in the upper part of the above photo.

Turns occur in phases: first, you reset the playing area from the last round, then all players take turns purchasing three cards and one quest. You do these with the pillars; it costs one pillar to purchase any card, but (here's the confusing part of the game), each card requires you to have the appropriate colour pillar to acquire it. Quest Card number 1 requires you to have the red pillar, for example. However, you don't have to spend the red pillar to get that card; you just have to be in possession of it. Thus, as long as you have the red pillar, you can pay the blue pillar to get Quest Card number 1. Some of the cards in the Agora require you to have two pillars, one of a specific colour and one of any other colour. But still, these cards only cost one pillar to acquire. It doesn't cost two pillars to get the card; you just have to have the two pillars.

Anyway, so you go around until everyone has three Agora cards and one Quest card. Agora cards are placed in your Domain, where you can use their abilities (sometimes the abilities are one-use only, others are once-per turn, others give you a bonus once when you first acquire them and then never again, and others have effects that are always on). Quest cards allow you to transfer cards from your Domain to your Elysium, as well as granting you money (sometimes a card effect costs money) and occasionally extra victory points. Quest cards also determine turn order for the next round.

If you end up not able to buy three Agora cards, because you don't have the pillars of the right colour, then you get a Citizen card (which is like a wild card when used to form legends, but has no powers and also incurs a small victory point loss for each legend that has one). If you can't buy a Quest Card because you don't have the right colour pillar, you get the last Quest card, but flipped over to indicate it is a failed quest. this gives you the bare minimum of transfers and coins.

After this phase, players use the transfers they earned from their Quest Card and any powers granted by cards in their Domain to move cards into their Elysium. Five rounds are played in this way, then you score the legends you've formed in your Elysium (cards in the Domain don't count). Highest victory point total wins.

This game had potential to be good, in my opinion, but I found that it was too difficult to plan what cards you wanted to purchase, as often, the cards you want will be taken by another player before it gets around to your turn again. It was difficult to decide which card was a safe purchase, and which you felt could wait until a later turn. This kind of detracts from what I personally find enjoyable about board games. But don't let me sour you on it; you might enjoy this type of game! I might not jump at the chance to play again, but I wouldn't say no if that's what everyone else wanted to play.

Anyway, that's it for next week. I'll see you again next time. Until then,