This week, I'm going to look at a game called The Resistance: Avalon. It shares some similarities with the popular party game Mafia (which I learned as Witch Hunt) that has been adapted to the game Werewolves of Miller's Hollow. It is, in essence, a variation of the game The Resistance, reworked to have a medieval theme.

We're going to take a look at this game, and as always, I provide ratings based on my system:

King Arthur's kingdom is in peril! To save the kingdom and protect the citizens of the noble realm, Arthur's loyal servants must go on a series of quests. Successful completion of these quests will ensure peace and prosperity for all. However, not all is well in the high court; evil lurks within the hearts of some of the courtiers... unknown to any save themselves, a small number of the people in Arthur's court are minions of Mordred, the malevolent offspring of Arthur and his sister Morgause! These servants of evil are working behind the scenes to prevent the successful completion of the quests and usher in an era of evil for Britain.

Gameplay begins with each player secretly receiving a role. The card they are dealt, which they must keep secret, describes the team to which they belong, as well as their role on that team. Teams win or lose as a unit; there is no single winner in this game. Teams consist of:

Now that everyone has the information that they require, play begins. Each round consists of two phases: selecting questors, and the quest itself. In the first phase, one player is the leader, and nominates players to be the questors. The number of players going on each quest varies; there are small mats that indicate how many players go on each quest. This is what they look like: 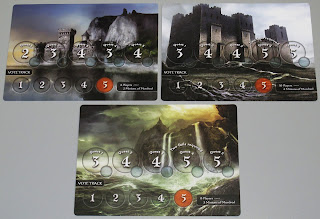 There is a mat for each of the possible number of players, from 5 to 10. The mat describes how many Minions of Mordred to include, as well as how many players go on each of the five quests. There are tokens to remind you which quest you are attempting, and whether that quest ended in success or failure.

Players take it in turn to be the leader. The leader chooses players to be questors for the current quest (he can choose himself, but he doesn't have to), and then all players vote to approve or reject these questors. Table talk is encouraged, and the vote is public, so everyone knows how you voted, and you know how everyone else voted. This is where a lot of information is made available; by seeing how people voted on certain questors (as well as what they have to say about the vote), you can begin to start forming ideas of who is and isn't on the same side.

If the majority of players vote to reject these questors, or the vote is a tie, then that group of questors does not attempt this quest. The vote track increases by one, and the next player becomes the leader, and will select a new group of questors. The vote track is important; if five successive groups of questors are rejected, then it is decreed that there is too much division in Arthur's court, and the Minions of Mordred are declared the winning team.

If, however, the majority of players vote to approve the proposed questors, then those players are sent on the quest. Each questor is given a Success card and a Fail card. They choose these cards in secret, and pass the chosen card to the team leader, who shuffles those cards together. The cards are then revealed.

Loyal Servants of Arthur must select the Success card. Minions of Mordred may choose either one. If even a single Fail card is included in the chosen cards, the quest fails (the exception to this rule is that the 4th quest in games with 7 or more players requires two Fail cards to fail). In this way, in a group of five questors, if a single Fail card is revealed, you know only that at least one of those five players is a Minion of Mordred, but you don't know which player it is.

So, for example, imagine that Amanda, Brian, Chris, David, Erin, Fran, Gemma, and Heather are playing a game. Amanda is chosen to be the first leader. In an eight-player game, the first quest has three questors. Amanda chooses herself, Brian, and Chris for those three questors. All players now vote to approve or reject these questors. Amanda, Brian, Chris, and Gemma all vote to approve, but David says that he doesn't trust Brian, and votes to reject. Erin also votes to reject, saying that she doesn't ever approve the first team; she wants to have a little more table talk before approving a group. Fran and Heather both also vote to reject these questors, saying that they don't trust Chris. As the vote was a tie, the team is rejected. The vote track is moved to 2, and the leader token passes to Brian, who must choose a new group of questors.

Brian chooses himself, David and Erin, and voting continues. David votes to reject this team again, saying that he still doesn't trust Brian, but everyone else votes to approve. Since these three questors have been approved, so they are each given a Success card and a Fail card. The vote track is reset to 1. David and Erin pass their chosen cards to Brian, who is the leader for this quest, and Brian shuffles them together without looking at them. Then he reveals the cards, one at a time. The first two are Success cards, but the third card is Fail. The quest has not been successful! A failure token is placed on the space for the first quest, and now everyone at the table knows that Brian, David, or Erin is a Minion of Mordred (or, possibly, that two of that group of three are Minions of Mordred, and one of them voted to have the quest end in Success to throw the other players off the trail).

The game ends when three quests have succeeded, or when three quests have failed. In the latter case, the Minions of Mordred have won. In the former case, however, the Minions of Mordred have one final chance to steal the victory away from the Loyal Servants of Arthur: The Minions reveal their cards, so that everyone knows who the evil bastards were, but the Loyal Servants of Arthur do not yet reveal their cards. This is because one of the Minions of Mordred is the Assassin. This player has one chance to kill Merlin. He names the player that he believes to be Merlin, and if he is correct, the Minions are declared victorious. It is for this reason that Merlin needs to be careful in revealing the information that he possesses. He doesn't want the other players to know who he is.

Mordred and Morgana make the Minions of Mordred more powerful:
This game is, in my opinion, a lot of fun. It takes all the drama and intrigue of Witch Hunt (or Mafia or Werewolves of Millers Hollow) and sets it in an arrangement that counteracts all the negative aspects of those games (most importantly the fact that players are constantly being eliminated from the game and no longer get to participate; in Avalon, all players stay in the game until the very end).

If you have a fairly large group of players, this is a great game to play. There aren't many games that accommodate more than six players, but this is one that does so, and does it admirably. I highly recommend it.

So that's my review. I hope you enjoyed reading it, and more importantly, I hope that it helped you to decide whether you want to give it a try. So have fun playing this game, and until next week, remember to

Email ThisBlogThis!Share to TwitterShare to FacebookShare to Pinterest
Labels: Avalon, board game, photos, review, The Resistance