Here's a review of a really interesting and innovative board game. Part of the innovation is that there is no board. It's called Hive, and if you're interested, you can play it online. And let's not forget the ratings:

The basic Hive set consists of twenty-two hexagonal tiles, eleven each in black and white. Each tile is embossed with a representation of an insect (technically, with an arthropod, as spiders aren't insects): one bee, three ants, three grasshoppers, two beetles, and two spiders. There are two expansions: one adds two ladybug pieces to each side, and the other adds two mosquito pieces to each side. 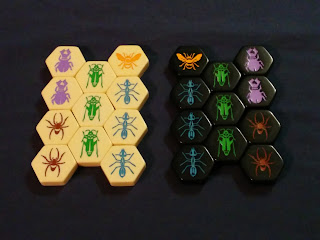 The game is, at its most basic, sort of like chess on LSD. Each piece moves in a specific way, and although you can't capture enemy pieces, the goal is still to 'checkmate' your opponent's king (or in this case, queen: the 'queen' bee). This is done by causing the opponent's queen piece to be completely surrounded (it doesn't have to be surrounded by your pieces; as long as there's a piece of either colour on all six sides of the bee, it counts). Each piece moves in a specific way.

The game starts out with each player taking turns placing pieces on the playing field. You must place your queen on the field within the first four turns. Other than that, on any turn, you can either put one of your pieces into play, or move one of the pieces already in play. When placing a new piece, it cannot touch an enemy piece. When moving, you cannot move a piece that would cause the hive to be split into two separate parts; all pieces must be connected to all other pieces at all times.

And that's pretty much it. If you'd like to know more, you can check out their US or UK website or just go straight to the tutorial video. But I think it's a neat idea, a fun little strategy game that's easily portable, challenging, and imaginative. So give it a try, let me know what you think, and don't forget to

Email ThisBlogThis!Share to TwitterShare to FacebookShare to Pinterest
Labels: board game, hive, review